I want to continually drink in these flitting days. The way the dawn beams through the water, the sight of wild energy, a lambent, emerald green looming through the visage of a wave, before it crashes into sound and vanishes- it is within these moments I thrive.

I bequeath myself to the sea, the fuel of all my passion. I relate to the little crab, with his legs of gold and eyes of grey swirled marble. I merge with the brine, and tumble with the waves-

I tumble so much so with the waves that I now must relate a wee story. Please forgive the abruptness.

It was a fine evening, the rosy moon beginning to climb above the milky horizon. The enveloping Blue of twilight was swallowing the last languid gasps of neon sunset, becoming just a blur of memory, as I swam away from my companion, a little black-tip shark. After an hour of swimming alongside him, as he darted fast and swiftly in and

out of the scintillating ball of tiny, flashing fish, desperately spitting out from the glazed surface of the sea, it was now time for our farewell. It seemed he understood, and he glided close, his dorsal fin slicing through the glass surface as he drifted right beside me, the way a dolphin might in a film. It was mournful to part, but we both had to move on. Our worlds so vastly different, it was truly phenomenal that we were able to abide in harmony together for so long.

So, feeling doleful and forlorn, I flippered downshore, cheering myself by imagining I was some sort of jubilant otter, periodically diving, kicking hard, then up for air, and down again. Sometimes I did a little roll-over at the surface and chirped. After an hour torn in half, I had finally swum to the point I desired, right in front of the boardwalk, where, oh eventually, I would fall out of the ocean, begrudgingly rise to my feet, and wincingly meander back into terrestrial life.

However, the night was truly fine, a great stream of ashen moonlight kissing the Sapphire Sea. Still imagining I was indeed some sort of sea-creature, I allowed the waves to carry me, toss me, slosh me about in the swash, nearly beaching me on shore; and then I would manage to flipper back into the depths. Over and over I did this. 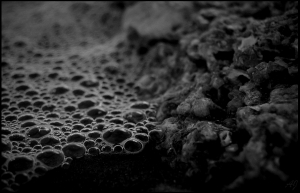 At last, my moonlit silhouette emerged from the tangy brine, and I puttered behind some fellow beach-goers as they were departing. Clambering the boardwalk, still in a deep reverie, I was astounded when a male Yorkshire accent broke through the chiming of the waves, “Was that you out there in the water?!”

“Oh why yes, I was swimming with some sharks a bit. It was groovy,” I replied with an invisible grin that hopefully beamed through the darkness.

The voice boomed again, “I thought you were a li’l whale!”

(The compliment of my life)

“Oh yes?! There were many sharks too. Did you see them?” I asked.

Obviously, he had not gone in for a dip. Even in the dark, I noticed he was wearing socks and sandals. Never….in Florida, socks? Oh my…and they seemed to be almost knee-high.

Then his wife chortled, “Oh this is the whale? Nice to meet you. Goodbye!”

And they dashed off, vaporizing into the night.

An astonishing, and deeply gruntling way to end the evening. I reflect back now with tears of tender joy that I was indeed mistaken for a whale….life is too glorious!